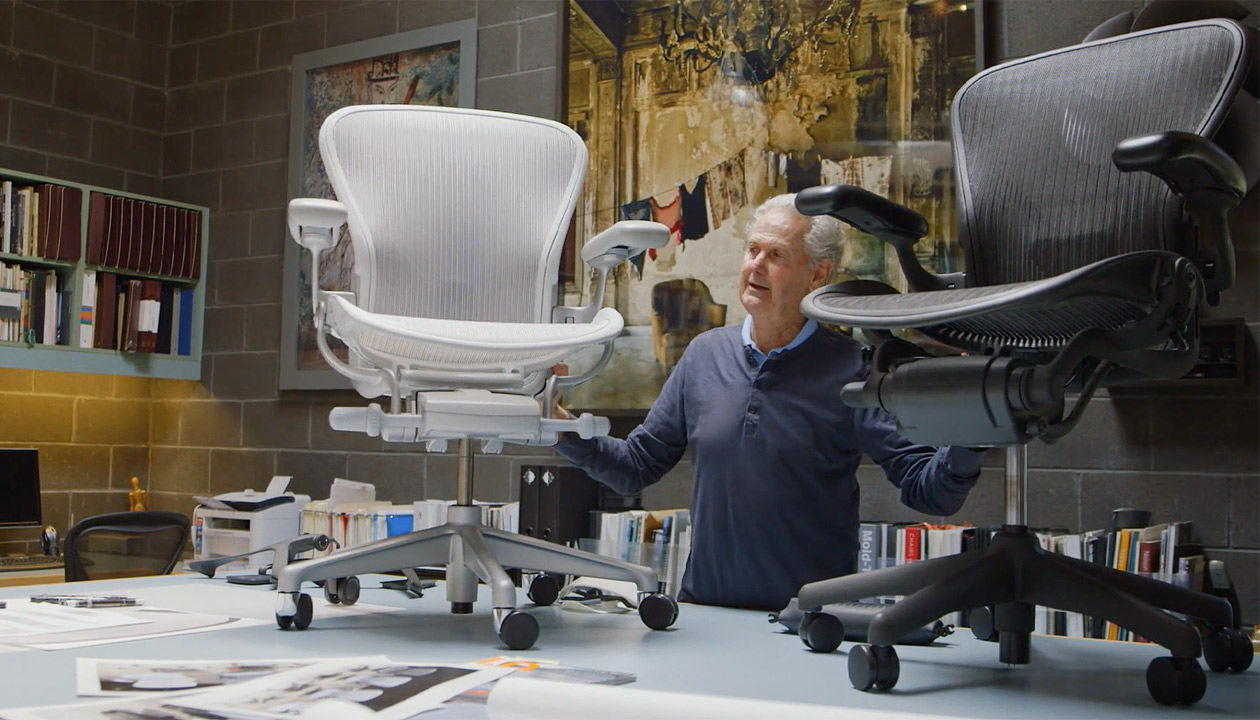 The iconic Aeron Chair has found its successor with the 2017 launched Remastered. The production of the Aeron Classic is ending, with the beginning of 2018 only the refurbished version can be purchased.

But considering the classic Aeron to have lapsed would be wrong. The Aeron Classic is and will always be the design icon of the 1990’s - and remains its value stability when taken good care of. As questions of good taste should not be argued, many collectors will keep faith with the Aeron Classic. Curious design friends, however, might want to know whether the new Aeron keeps his promises or not. After a longer seating test, we think: With the Aeron Remastered, Herman Miller jumped right into the 21st Century, molding new ergonomic insights into a worthy successor. A comparison with six small but fine changes:

While the Aeron Chair supports the upper or lower back with the PostureFit or the Lumbal Pad, the Remastered still comes with a Lumbal Pad but also with a renewed PostureFit SL. This invention supports both areas, as two pads (adjustable with two small cogs) support both the sacrum and the lordosis (hence the name “SL”). Thus, ergonomic stability and the healthiest seating position are guaranteed. 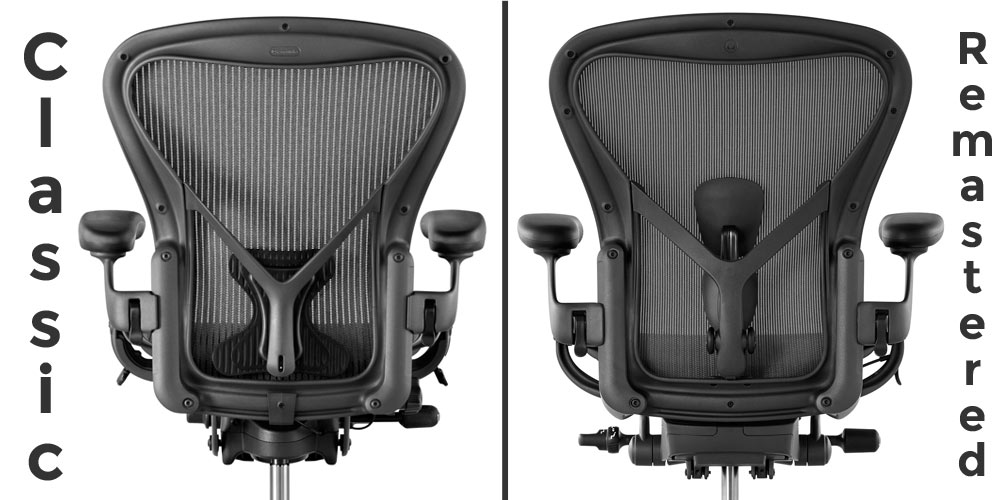 Both the Aeron Chair and the Aeron Remastered are breathable due to the flexible synthethic mix of the seat and the back of the chair. The patent Pellicle membrane, which recreates the diffusion processes of the human skin, prevents heat accumulation. Plus, temperatures are kept especially low at the usual pressure points.

Thanks to the improved 8Z Pellicle membrane and its eight variable support zones, the Aeron Remastered offers a more aimed support. That is because of the membrane’s different pressure points, which have different hardness grades and elasticities.

Even easier to configurate

Individually adjustable in height, tilt and tilt tension, arm rest height and arm rest angle are both the classic and his successor. Thanks to the kinematic tilt, both Aeron models naturally adapt to the body movements while working at the desk.

With the Remastered the function of the forward tilt is more pronounced than before. Also, the setting of the tilt tension is easier adjustable. The levers are easier to access and can be handled more intuitively. 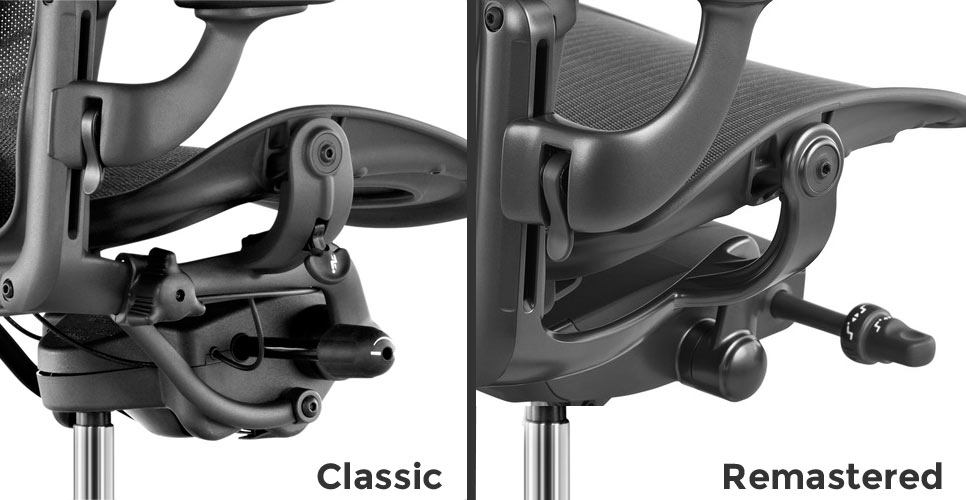 The arm rest of the Aeron Classic can be swivelled up and down as well as about 17° inwards and outwards. With the Aeron Remastered, they are additionally adjustable in depth. With the setting in angle and height, they become 3D-arm rests. They can be purchased as vinyl or leather arm rests.

The Aeron Classic weights 23kg, able to hold up to 139 kg body weight. The Remastered can bear the same amount of weight but has become lighter. Material savings are the reason for the Remastered having lost two pounds. That is why the new edition appears a little slenderer and more defined than his predecessor. 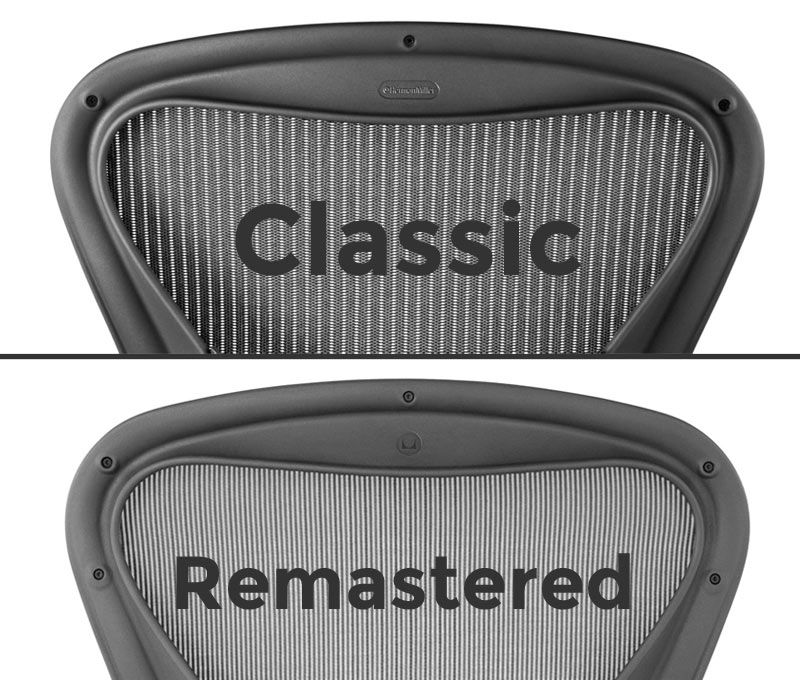 From Europe? Check our Shipping Conditions!